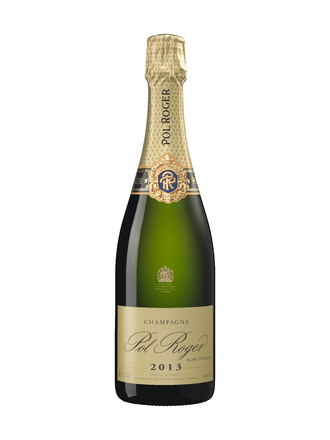 Winter was cold with little sunshine; it was marked by frequent frosts and several incidences of snowfall. The onset of spring-like weather was delayed, and the month of May saw a return of unseasonably low temperatures and high rainfall. June saw a return of normal temperatures. July and August were hot, sunny and dry. A spell of rain at the beginning of September allowed the grapes to swell. Thankfully drier weather encouraged full maturation of the vines, albeit a fortnight late compared to the average of the last ten years. Harvesting started on 24th September and lasted until 9th October.

The must undergoes two débourbages (settlings), one at the press house immediately after pressing and the second, a débourbage à froid, in stainless steel tanks at 6°C over a 24 hour period. A slow cool fermentation with the temperature kept under 18°C takes place in stainless steel, with each variety and each village kept separate until final blending. The wine undergoes a full malolactic fermentation. Secondary fermentation takes place in bottle at 9°C in the deepest Pol Roger cellars (33 metres below street level) where the wine is kept until it undergoes remuage (riddling) by hand, a rarity in Champagne nowadays. The very fine and persistent mousse for which Pol Roger is renowned owes much to these deep, cool and damp cellars.

William Kelley 93/100
Pol Roger's newly released 2013 Brut Blanc de Blancs is very appealing, unwinding in the glass with scents of crisp orchard fruit, citrus zest, sourdough bread, pastry cream and almonds. Medium to full-bodied, taut and incisive, it's more chiseled than the richer, more concentrated 2012, with racy acids and a gently reductive edge, concluding with chalky grip. This is a real classic in style and should develop beautifully with age on cork. Drink 2021 - 2040, The Wine Advocate March 2021

Pol Roger tasting note;
The 2013 Brut Blanc de Blancs is exclusively made from Chardonnays selected from the Grands Crus of the Côte des Blancs : Oiry, Chouilly, Cramant, Avize, Oger and Le Mesnil-sur-Oger. Produced in limited quantities, this Cuvée has been aged for 6 years in our cellars before being released onto the market. Blanc de Blancs 2013 is somewhat of an infant compared to its old sibling, the 2012, which was far broader and forthcoming on release. 2013 is full of vibrancy, lemon peel, elderflower and toasted sourdough. The palate is incredibly tightly wound, with a chiselled backbone of acidity, slowly evolving in the glass to open to a richer, broader mouthfeel. The wine is incredibly impressive, pure and defined. Those who have the patience will be truly rewarded in the years to come. 7gl

Pol Roger founded his Champagne house in 1849 and it is still proudly independent, under family control. It owns 89 hectares of vineyards on prime sites of the Vallée d'Epernay and on the Côte de Blancs. Its cellars run for 7km and are on three levels, the deepest known as the 'cave de prise de mousse' at 33m below street level. As the name suggests this is where the wine undergoes its secondary fermentation in bottle. The fact that this deep cellar is at 9oC or less rather than the normal cellar temperature of 11-12oC prolongs this fermentation and contributes to the quality and particular style of the wines and their famously fine bubbles.