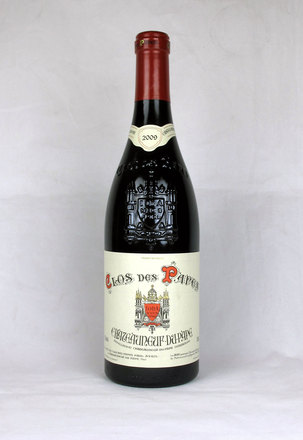 Robert Parker 98/100
The 2006 Chateauneuf du Pape is one of the two or three candidates for the wine of the vintage. An extraordinarily great wine, the 2006 is far superior to the 2005, which was amazing, and while made in a different style, is as great as the 2003, and such legends as 1990 and 1978. Fashioned from a minuscule 21 hectoliters per hectare, and tipping the scales at 15.2% natural alcohol, the 2006 boasts a dense ruby/purple color to the rim, in addition to an extraordinary bouquet of melted licorice, spring flowers, raspberries, black currants, spice box, and earth. In the mouth, it is utterly profound - full-bodied and multidimensional with astonishing purity, length, equilibrium, and intensity. This is a superb vintage for the Avrils, and Vincent deserves huge accolades for producing a wine of such incredible intensity and complexity. Think of Clos des Papes as a Chateauneuf du Pape with the complexity of a top-notch grand cru Burgundy from the Cote de Nuits Wine Advocate October 2008

This is one of the great estates in Chateauneuf du Pape, with a history that dates back to the mid-1700s. I believe the Avril family first estate-bottled wine in 1896. Clos des Papes, with its 90+ acres of vines spread among 24 separate parcels in the appellation, is one of the traditional hallmarks of classic, long-lived Chateauneuf du Pape. Everything is aged in old wood foudres, no old vine or luxury cuvee is produced, and the red wine is a classic blend of 65% Grenache, 20% Mourvedre, 20% Syrah, and the rest Vaccarese, Counoise, and Muscardin. It is generally not fined or filtered after aging 15 months in these old wood foudres. The white wine is an equal-part blend of Grenache blanc, Clairette, Roussanne, Picpoul, Bourboulenc, and one could argue that it might possibly be the longest-lived dry white of the appellation. (Robert Parker, The Wine Advocate)