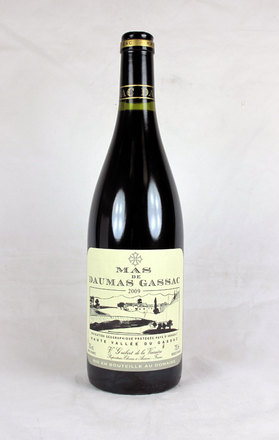 Mas de Daumas Gassac was established in the 1970s when Aimé Guibert,a Parisian glove manufacturer purchased the property, and since then has come to be described by some as the Grand Cru of Languedoc. After the renowned oenologist Professor Henri Enjalbert pointed out that the unique combination of the red glacial soils beneath the local garrigue with the altitude and currents of cool air that passed over the slopes made this an ideal spot for viticulture, Aimés passion for wine was ignited. He Planted un-cloned Cabernet Sauvignon vines. The Guibert mantra is that uniformity is the enemy of quality. They tracked down some vines propagated from cuttings taken in some of the great Bordeaux properties during the 1930s & 1940s. And, as in the best Medoc chateaux, their choice was based on quality and diversity rather than on yield and disease resistance. Once Gault et Millau labelled the estate as the Languedoc Chateau Lafite; sales of the red wine exploded. Today three of Aimé's sons, Samuel, Roman and Gaël work in the business.