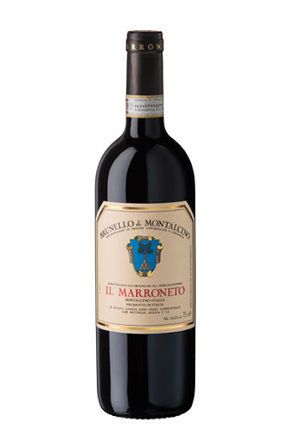 Eric Guido, Vinous.com 93/100
The 2017 Brunello di Montalcino wafts up with vibrancy and spunk, showing woodland berries and herbs with crushed wet stone and undergrowth in an incredibly fresh and lively expression. It's soft and pliant upon entry, enveloping with its saturating raspberry fruits and inner spice, as mineral tension builds, giving way to sweet, elegant tannins and inner florals. The 2017 shows a more slender yet well-muscled interpretation of the 2017 vintage, but it remains remarkably pretty and balanced throughout. Due to the vintage conditions and severe selection, production was down by 12%. Drink 2024 to 2031, Reviewed December 2021

Stretching over a tiny 9 hectares, Il Marroneto is owned by the charismatic Alessandro Mori. Son of lawyer Giuseppe Mori, Alessandro gave up his law career to make Brunello full time in 1994. A self-proclaimed traditionalist, he believes Brunello should always be age-worthy and full of energy, supported by a hallmark vein of acidity. In this context, it is then not surprising that the wines of Il Marroneto are some of the most elegant and age-worthy Brunello in Montalcino, demonstrating extraordinary breeding and grace.

The estate takes its name from a medieval tower dating back to the 13th century where the nuns (that lived in the Madonna delle Grazie convent) stored chestnuts used to make flour for bread. The vineyard lies at 400 meters above sea level, and the soils are an intricate mix of mostly sand large stone of limestone and Galestro.

Eric Guido, Vinous.com December 2021
Standing on the balcony of the Il Marroneto winery, looking out across the Madonna di Grazie vineyard and, beyond that, all of Montalcino's north hill puts the magic of this place and this wine into perspective. This is not your average Montalcino sight or terroir. In fact, it's difficult to compare this location to nearly any other place. As you descend down from the castle town, the inclines become quite steep very quickly. In fact, without the right vehicle and tires, you could almost imagine losing control on these dirt roads and sliding backward or literally off of the edge. This is high elevation, with the Madonna di Grazie vineyard, which is Il Marroneto's first vineyard, planted in 1974, averaging around 400 meters. Owner and winemaker, Alessandro Mori explained to me, 'We are standing on a beach.' This is when things get really interesting, as most producers on the north hill have a combination of soils that mix the deposits of an ancient sea with the deteriorating shear rock of the Montalcino hill that has slowly crumbled down into their vineyards over the centuries. However, at Madonna di Grazie, we are on the 'beach', at the water line, and these high-elevation vineyards are growing in much sandier soils, laced with marine fossils and minerals. This mix also means that they retain less water which, when combined with these old vines, creates fruit of extraordinary character. Now we add the influences of northern wind currents to the equation, which descend upon this hill each evening, cooling and tempering the vines. When you take into account the natural approach, traditional methods and transparent winemaking of Alessandro Mori, it suddenly becomes very easy to see why the Brunello di Montalcino Madonna di Grazie is a standout in nearly every vintage, and also able to excel in the most difficult ones. Of course, Il Marroneto is about much more than just Madonna di Grazie. The estate Brunello is also at the head of the pack, from vineyards further down the hill at around 250 meters of elevation. These parcels enjoy the same loving care, yet in soils that promote a lighter, more delicate yet still characterful and age worthy style. The Brunello of Il Marroneto is pure elegance, yet delicate in feel. Both wines undergo extended aging in a combination of large French and Slavonian oak casks, with just a matter of time and material that sets them apart. These are living wines which, when tasted, actually express a sensation of wholesomeness.

But wait, there's more. While visiting the winery in July of 2021, I was confronted with a single barrel sample that was a blending of three barrels, all from the 2019 vintage and the Madonna di Grazie vineyard. As explained by Alessandro Mori, when his son Iacopo officially joined the winery the previous year, he gave him full control over creating his own special blend from these barrels. The wine, labeled Rosso di Montalcino Selezione Iacopo, is just being released this year, having spent two years in cask. Luckily, an official bottled sample of this wine was delivered to our offices along with the new vintages of Brunello; and yes, lightning did strike twice. While it will be priced along the lines of the Brunello, this represents an amazing relative value to lovers of this estate. And last but not least, let's just say that Alessandro Mori has a couple more tricks up his sleeve, which includes prospects for another Riserva. Keep in mind that only one has ever been released in the history of the estate. I'm very happy to report that Il Marroneto remains at the top of their game and at the head of the pack.