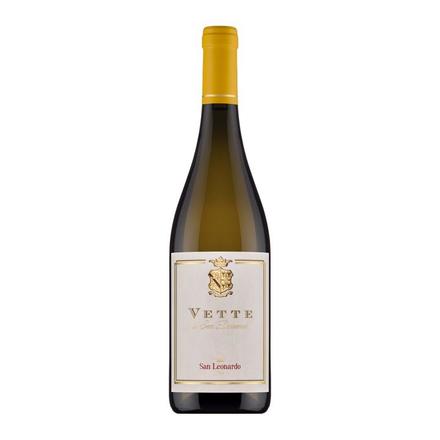 Bright refreshing 100% Sauvignon Blanc grown at high altitude and fermented and matured in stainless steel. A deliciously crisp dry white to enjoy in its' youth.

Tenuta San Leonardo is one of Italy's most iconic estates, famous for the international varieties they grow that thrive in Alto Adige. The estate covers an overall area of 300 hectares, of which the vineyards, planted to red grapes beginning at an elevation of 150 metres, amount to 30 hectares. Merlot is planted in pebble-rich soils that were once the bed of a tributary of the Adige, while Cabernet Sauvignon and the old vineyards of Carmenère are in predominantly sandy soils. All are well-drained, low-fertility soils that yield wines with truly unusual levels of anthocyanins, and not just for the Trentino. In 2015, San Leonardo launched a project of conversion to organic viticulture, which concluded successfully in late 2018 with the award of official certification. In the same year, the BWA Friends of Biodiversity organisation certified San Leonardo as a Friend of Biodiversity, testifying to San Leonardo ́s deep commitment to preserving the character of its growing area.

The estate lies in the Adige river valley, between the slopes of Monte Baldo and the Lessini Mountains. Winter snows often cover the vineyards, protecting them from severe cold, while during the vine's growth period. Day-night temperature differentials, significant even in the summer months, not only heighten grape aromatics but also extend the ripening period. During the entire year, and particularly during the hottest months, the Ora del Garda wind blows over the vineyards, warming and drying the leaves, thus protecting them from fungal diseases.

On the estate, the family has always grown international varieties. Carmenère, planted initially in the mid-1800s, is the true soul of San Leonardo wines; trained both on pergolas as well as to the guyot system, it gives character and identity to San Leonardo. Merlot, here since the early 1900s and trained to both pergola and spurred cordon, gives the wine its roundedness and smooth texture. Cabernet Sauvignon, finally, which Marchese Carlo planted in 1978, is trained exclusively to spurred cordon, and provides structure and elegance. The Sauvignon Blanc 'Vette' is named for the imposing peaks that rise above the vineyards.