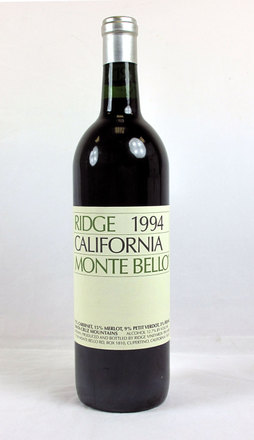 En Primeur In Bond per 6x75cl

Following the dry winter of 2018, the heavy rains of 2019 were welcome. Monte Bello received sixty-five inches of rain for the season, twice our average amount. It rained often, but not torrentially as the weather systems moved through. It allowed for good absorption into the subsoil avoiding erosion while replenishing underground water reserves.

Once spring arrived, there was explosive growth of grass and cover-crop that helped with drawing excess water out of the ground. This was followed by frequent mowing which prevented nutrients being pulled away from the vines. Our Sonoma County vineyards received a larger amount of rain than did Monte Bello. The ground was saturated with water through late spring. Having great drainage in these vineyards was essential for inducing water stress later in the growing season.

Once summer arrived, it brought several lengthy heat waves between June and July. This accelerated the growing season and energized the vines into extending their shoots and filling out canopies, growing inches by the day. For most vineyards, flowering occurred during calm weather. Clusters were full and abundant. The merlot parcels at Monte Bello were the only ones that got caught by bad weather during bloom. Their clusters had a lot of shatter resulting in great concentration but unusually low yields. Throughout August and September, despite bursts of heat, cold foggy weather slowed ripening.

Our first pick was done on August 23rd, bringing in the old vine carignan from the Evangleho vineyard in Contra Costa County. Dusi Ranch zinfandel from Paso Robles followed on September 2nd. Geyserville took much longer to ripen with the first block not coming off until September 16th. The rest of Geyserville trickled in, with most of it brought in at the end of September. The last three parcels were petite sirah harvested on October 8th. Monte Bello's chardonnay ripened later than normal, while the white rhone vines in the Adelaida District ripened right on time (middle-to-late September.) During that time, there was a surge of white grapes coming into the winery and requiring the presses. It was at the same time that many red fermentors needed to be drained and pressed. With the pace of this harvest, and yields being larger than expected, quick turnover of fermentors was necessary. At the peak of harvest there were forty red tanks filled and fermenting at once, the 'critical mass' moment of harvest. Our small fermentors achieve greater extraction from the skins during fermentation and also allows us to separate vineyard parcels as they are harvested. This approach gives more options during assemblage so we can be more selective with the lots chosen.

For the 2019 vintage at Monte Bello, we fermented 172 red and 19 white wine lots. Assemblages have already been done for most of the zinfandels. Chardonnay, white rhone varietals, and Monte Bello components will be tasted and assembled throughout the first half of 2020. Though young, the zinfandels are delicious and more on the elegant side. Chardonnay and white rhones are still fermenting, but promise to be of some of the finest quality I have ever seen; they are truly amazing and it will be very exciting to see how they come together after malolactics finish this coming spring.

Monte Bello's bordeaux grapes were slow to ferment but produced outstanding quality. Our only wish would have been for more merlot, which is the shining star of the vintage. There are so many excellent lots to choose from to make the 2019 Monte Bello. Merlot, cabernet and petit verdot, should come together beautifully at assemblage and produce a good number of cases.

We had to pull out the cabernet franc parcel at Rousten, so for now we only have our oldest block to consider adding. It was, as in the past several years, co-fermented with the surrounding old vine merlot and cabernet sauvignon. This may be the most successful vintage of having done this co-fermentation. The wine is quite deep and sensuous. Currently, in the cellar the wines are quickly finishing malolactics and starting to settle down. The first assemblage will happen in early February. There is always great anticipation among the winemaking and vineyard teams for this tasting. It is the culmination of all our hard work of farming the vineyard and extraordinary care in the winery.

Ridge was founded in 1959 but has a history dating back to the late 19th century when an Italian immigrant bought the 180 acres near Monte Bello Ridge. Cabernet has been vinified there since the 1940's and Zinfandel saw its first vintage in 1964. CEO Paul Draper, took the reins in 1969 and pioneered a 'hands off', non intrusive approach to wine making. Sustainable farming is practiced at Ridge and their winery has won numerous environmental awards over the years. The vineyards are all dry-grown with only new vines receiving drip irrigation until they are established.

The red wines are fermented in small-capacity fermenters to assure full extraction and intensity. The juice is drawn off, gently aerated, and pumped over a floating cap of grape skins. Once pressed, all wines go through a natural malolactic fermentation. Monte Bello, the flagship wine of the estate, is predominantly Cabernet Sauvignon and spends roughly 17 months in new American oak.